This article was first published in The Evening Echo [Cork] on 2017-05-25. Text underneath the photo. 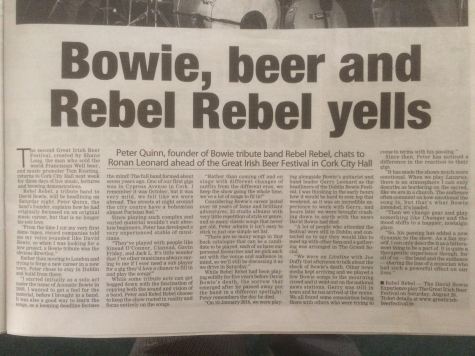 The second Great Irish Beer Festival, created by Shane Long, the man who sold the world Franciscan Well beer, and music promoter Tom Keating, returns to Cork City Hall next week for three days of live music, lectures and brewing demonstrations. Rebel Rebel, a tribute band to David Bowie, will be headlining on Saturday night. Peter Quinn, the band’s founder, explains how he had originally focused on an original music career but that is no longer his sole love, “from the time I cut my very first demo tapes, record companies told me they my voice sounded like David Bowie, so when I was looking for a new project a Bowie tribute was the obvious direction.”

Rather than moving to London and trying to forge a new career in a new town, Peter chose to stay in Dublin and build from there, “I started initially as a solo act under the name of ‘Acoustic Bowie’ in 2008, I wanted to get a feel for the material before I brought in a band, it was also a good way to learn the songs as a looming deadline focuses the mind! The full band formed about seven years ago, one of our first gigs was in Cypress Avenue in Cork. I remember it was October but it was very mild, we felt like we were abroad! The streets at night around the city centre have a bohemian almost Parisian feel.”

Since playing such complex and varied material wouldn’t suit absolute beginners, Peter has developed a very experienced stable of musicians, “they’ve played with people like Sinead O’Connor, Clannad, Gavin Friday, and Jack L. It’s little wonder that I’ve other musicians always saying to me if I ever need a sub player for a gig they’d love
a chance to fill in and play the songs!”

While some tribute acts can get bogged down with the fascination of copying both the sound and vision of a band, Peter and Rebel Rebel choose to keep the show rooted in reality and focus entirely on the songs, “rather than coming off and on stage with different changes of outfits from the different eras, we keep the show going the whole
time, we’ve a lot of songs to fit in!”

Considering Bowie’s career lasted over 50 years of fame and brilliant adventures; 25 studio albums with very little repetition of style or genre, and so many classic songs that never get old, Peter admits that it ain’t easy to stick to just one simple set list, “there are so many songs in that back catalogue that can be a candidate to be played, each of us have our personal favourites and we pick each set with the venue and audience in mind so there’s we’ll still be discussing it as we drive in Saturday.”

While Rebel Rebel had been playing solidly for five years before David Bowie’s death, the sorrow that emerged after he passed away put the band in a different spotlight, Peter remembers the day he died very clearly, “on 10 January 2016 we were playing alongside Bowie’s guitarist and band leader Gerry Leonard as the headliners of the Dublin Bowie Festival. I was thinking in the early hours how it would be hard to ever top that weekend as it was an incredible experience to work with Gerry, and hours later we were brought crashing down to earth with the news David Bowie had died. A lot of people who attended the festival were still in Dublin and contacted us to say they would like to meet up with other fans and a gathering was arranged in The Grand Social. We were on Liveline with Joe Duffy show that afternoon to talk about the shock of Bowie’s death. Other news media kept arriving and we played a few Bowie songs to the mourning crowd and it went out on the national news stations. Gerry was still in town and he too arrived a t the venue, we all found some consolation being there with others who were trying to come to terms with his passing.”

Since then Peter has noticed a difference in the reaction to their gigs, “it has made the shows much more emotional. When we play ‘Lazarus’ there is an atmosphere I can only describe as bordering on the sacred, like we are in a church. The audience often comment on how emotional the song is, but that’s what Bowie intended, it’s loaded. Then we change gear and play something like ‘Changes’ and the mood shifts to a happier nostalgic place. So his passing has added a new dynamic to the show. As a fan myself I can only describe it as a bittersweet thing to be a part of. It is quite a therapeutic experience though, for all of us – the band and the audience – sharing the loss of a musician who had such a powerful effect on our lives.”